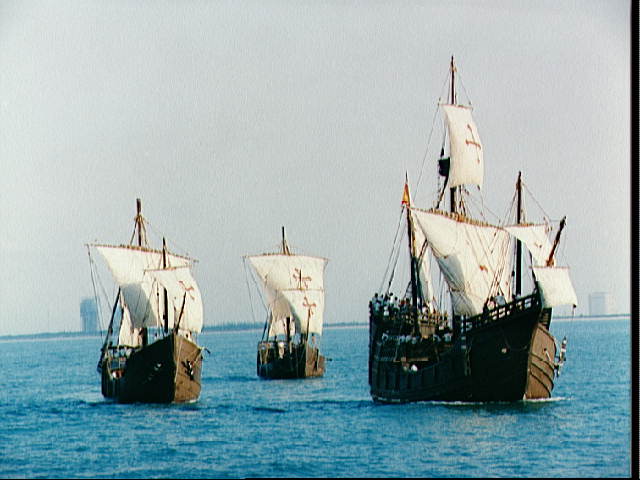 Early one morning in September of 2008 I had a vision while in the church prayer room.

In the vision, I was standing outside of the church in a field. I was soon joined by others from the church standing alongside me. We stood and looked toward the road because there appeared a great body of water and three large ships docking.  I thought, “Oh! There they are – the Nina, the Pinta, and the Santa Maria.”  We watched as people began filing off of the ships and walking toward us. Soon the field was full of people.

A man appeared and started putting everyone into groups and sat each group in a circle. The people were instructed to stay with the group they were assigned to. When the man turned around and I saw him, I knew it was Jesus.  He would put people in a circle and then point out an individual standing with me to be over the group saying, “This group is yours.” And they took their place in the circle seeming so comfortable there.

I thought maybe He was going to feed the people because I had read the Bible stories about the feeding of the thousands and what I saw happening reminded me of that. I was excited about the miracle I thought was getting ready to happen. (Little did I know…)

He then pointed toward a group and said to me, “These are yours.”

I immediately questioned Jesus, “What do you want me to do with them?”

He said, “Teach them!” and He walked on.

My heart dropped and I started to panic. I didn’t consider myself to be a teacher and what’s more, I did NOT want to be a teacher. That was my mother’s call, my sister’s call, and so many others in my family. In a family of preachers and teachers, I had wanted to be different and so I made my own path. So I ran after him and I said, “Jesus!”

He walked on a little further seeming to ignore me so I said it again a little louder “JESUS!”

He walked on continuing to make assignments. So I screamed as loud as I could, “JESUS! JESUS!”

He then turned toward me and I said as desperately as I could, “I am sorry, but I can’t…I am NOT a teacher!!!” He then said so gently but yet so very sternly, “You are now.”

Then Jesus pointed at my circle in such a way that I knew He was saying get back over there and take your place.

And then I was back in the prayer room.

I am crucified with Christ: nevertheless I live; yet not I, but Christ liveth in me: and the life which I now live in the flesh I live by the faith of the Son of God, who loved me, and gave himself for me. ~ Galatians 2:20

How Can I Pray for You?